My most recent album - The Day and the Night of the Body - was released by Lumberton Trading Company and is available here on CD at Fourth Dimension Records. A selection of my previously available work can be found here at Bandcamp, with further additions to be regularly made to the collection on there over the rest of 2021. Mixes of music by others that I've been especially interested in and enjoying can be found here at Mixcloud.
Posted by Brian Conniffe at 12:27 AM

The Day and the Night of the Body

I have a new album coming out very soon on Lumberton Trading Records / Fourth Dimension Records. 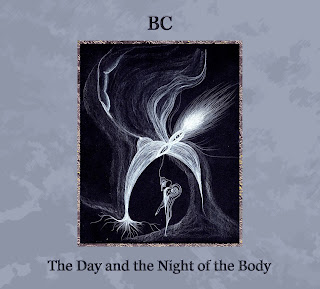 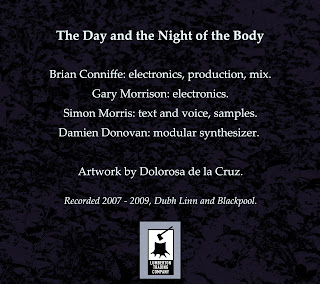 The press release from the label is as follows:

New two track album from Ireland's Brian Conniffe, previously known for his work with Nurse With Wound and a MLP released on LTCo at the very end of 2013. One of these lengthy pieces features the late Simon Morris (Ceramic Hobs) providing spoken word he wrote exclusively for it. The CD also arrives in Dolorosa De la Cruz artwork and includes a 4pp. booklet.

Brian Conniffe is a cross-genre musician who has worked with a long list of collaborators covering a diverse stylistic range. Although perhaps most active as a member of a variety of synth-pop acts in his native Ireland, his most interesting work is that of far less conventional - deliberately uncommerical and even intentionally esoteric - experimental projects, characterised by a fusion of the darkest psychedelia with disquieting ambience. The most noteworthy of these possibly being the limited edition collaboration of Nurse With Wound’s 'Musique Pour Faits Divers' (2016).

This album was recorded from 2007 to 2009, and consists of two expansive pieces, which - as the title suggests - are characterised respectively by bright and nocturnal atmospheres, and retain an intense physicality undiminished by the occasionally abstract nature of the wide-ranging sound pallet utilised. The first piece is symphonic tapestry of colourful noise and alien-sounding drones, constantly shifting and avoiding monotony, reminiscent in places of the work of Labradford, The Hafler Trio, John Duncan, and Aube at their best. The second piece is altogether darker and more defiant of description and comparison, based around a long text written and spoken by the late Simon Morris (author and frontman of the Ceramic Hobs), which moves from its surreal yet possibly familiar beginning into an astonishingly breathless and tumultuous confessional, a true voice of the lost. The disquieting use of samples provided by Morris provides an intense sense of the uncanny.

Brian Conniffe says of the album's collaboration, "I got into contact with Simon Morris through collecting the most obscure music from the fringes of industrial music. We quickly developed a regular correspondence, exchanging cassettes, CDs and records of rare music, eventually meeting in person. He was a naturally entertaining writer, as the readers of his books will know. These and the very strange music his band produced also offered an often astonishing and sometimes shocking insight into the life of the mental health service user: a perspective which, combined with that of a highly active participant in the most extreme forms of underground music, created a truly unique voice."

"At the time this album was recorded, I spent almost all of whatever free time I had creating very experimental and mostly improvised music, working with anyone around me who would participate. There was essentially no commercial aspect to what was being created, I was simply making music for myself, that I personally wanted to hear. At one point, Simon recorded his spoken vocals for me, and contributed them along with a handful of mysterious samples. And so, this album was created. It remained unreleased as shortly after its recording, I began to work with bands who were producing more conventional music, who were very active live and had established audiences in my native Ireland. Now, for a number of reasons, it feels like the right time for this to be heard."

Going into production during mid-June 2020 and hopefully available by mid-July.

Click here to hear an excerpt from the track with Simon Morris.

Another excerpt from this album can be heard by clicking here, around this 6 minute mark of this mix.

For those interested in hearing the more conventional synth-pop music I have been involved in, click here.

Finally, a piece of mine was included in a mix by Hilary Woods for NTS Radio. Click here to listen to it. My piece is the second in the mix, and it starts at 3:18 and runs for 10 minutes until 13:18. Many thanks to Hilary for including my work in this. 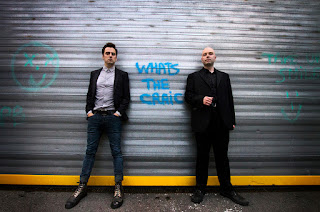 Our next concert - and our first in over a year - is at Open Ear Festival on Sherkin Island, Cork, Ireland, 30 May - 2 June.

Posted by Brian Conniffe at 9:24 AM

Patrick Kelleher and his Cold Dead Hands: The Sea 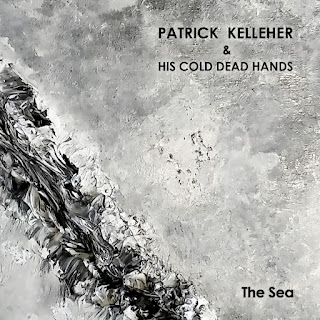 We unreservedly assert and support the rights of all women to total bodily autonomy. We stand in complete and active opposition to any and all institutions and legislation which oppress women, including those which curtail freedom of reproductive healthcare choices.

This song is available as a pay-as-you-like download with no minimum. Any proceeds from this download will go to the Abortion Rights Campaign.

Cover artwork and design by Jason Kearney.
Posted by Brian Conniffe at 2:52 AM

Performing a live music score to my favourite film at 8:15 this evening at A4 Sounds, St. Joseph's Parade, off Dorset Street, Dublin. 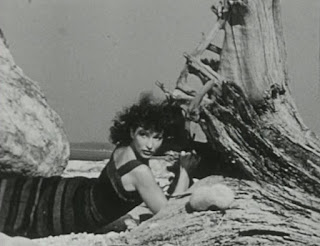 Posted by Brian Conniffe at 4:17 AM

The video for Faster from this EP can be viewed here at YouTube.

Posted by Brian Conniffe at 2:03 PM